My mum and I had been pretty adamant that I was infertile. As I had put it to Travis: “I’m potentially like a barren desert.”

Oh, how wrong I was.

At some point in late January, while we were driving into the office, I suddenly felt this need to throw up. Could have been the temperature in the car for all I knew – Trav was born in Zimbabwe and has spent half his life working in hot, sunny places, so it’s safe to say he doesn’t really mind a little bit of warmth in the car. I, in contrast, like the cold. The nausea didn’t last long. In fact, within seconds it had vanished.

Now, I know what most women would probably be wondering, mainly because it was one of the first things the doctor… well, it was a question the doctor probably should have asked off the cuff, but it took me telling him he would probably need to know for him to actually ask it: when was my last period?

Funny thing about periods – I’d always loved the fact that I never had any of that pesky regularity to hold me back. I told him I might have had a period back in November, but there was really no guarantee there because I didn’t see the point in keeping track when I have maybe four a year. On a bad year.

What actually made me think I could be pregnant was the moment I woke up with a frisky boyfriend who came out and said that my boobs were swollen. I looked down and started freaking out immediately. Only one inch of my breast was swollen. It was basically a huge lump.

Back in December I’d gone to the doctor because of a small lump, which had turned out to be just a spot, and this new thing had me crying into my very public breakfast.

Dad was obviously distressed. “You know you can talk to me about anything if you have a problem, don’t you?” he said, and I of course know that – he had always been my fall guy for everything. But I tearfully said there are some things you just want your mum for. He nodded, not upset by that statement at all, and advised me to talk to my aunt.

My aunt advised me to take a pregnancy test and if it proved to be negative, go straight to the doctor.

I took one that evening and it told me I was over three weeks. I showed it to Travis, who had a little difficulty hiding the smile, then spoke to my dad. Of course, a few days later I re-took the test – just to check – which then led to my doctor’s visit.

Everything he should have asked me, I prompted him with. He was ready to turn me away, displaying the attitude of a man who figured that I probably knew exactly what I should be doing (“Of course, you know the importance of taking folic acid for the first three months.” No, actually, I don’t know that! Why would I know how important it is for me to ingest what I’ve understood to be ant juice when I’ve never been exposed to pregnancy?) until he discovered that my irregularity could prove to be a problem with dating my alien infestation.

“Well, it’s very important to know how far along you are,” he insisted, and I sighed with relief at the fact that there might have been some action soon.

It took a couple of weeks for a scan to be arranged, and aside from the tearful display accompanying the sight of a heartbeat – my god, I was so worried there’d be nothing there when they looked – all I could think was how this scan wasn’t all I had imagined it to be.

I was with goldfish.

Not just a goldfish. A goldfish being eaten by Jabba the Hutt. 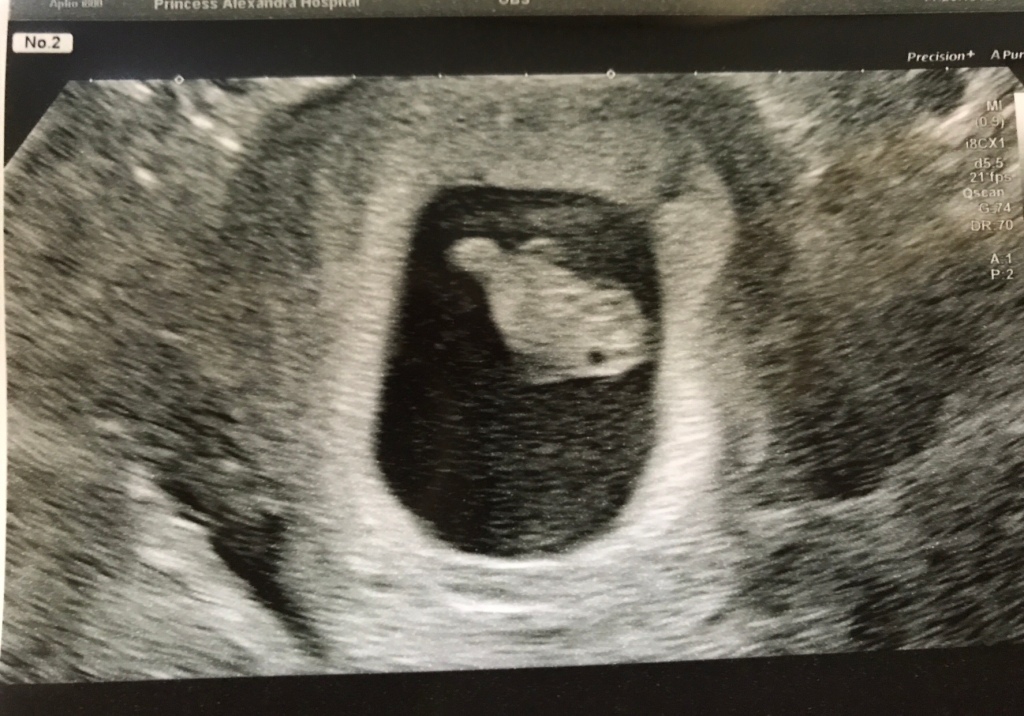 I’m currently 14 weeks, 6 days according to the first scan. If you pay attention to the second scan, I’m 15 weeks, 3 days. This means a couple of things to me.

First, my foetus currently has all the bits and bobs it should have (in the World According to Kate) and is ageing pretty rapidly therefore may well be a mutant.

Second, if it is a mutant and doesn’t come out as Professor X or Magneto (Wolverine, for obvious reasons, is a total no-go, thank you), wouldn’t it be wonderful if it comes out as Tom Thumb, twirling a cane on the incredibly easy exit? At the moment I’m having issues knowing it’s around the size of an avocado, so popping out something bigger is daunting.

It doesn’t help my thinking much to think a) Travis has twins in the family and I’m adopted so don’t have a clue if they run in mine or not, and b) Travis is huge. I mean, popping out his sprog’s going to likely be harder than I imagine it would if I was still dating whelps.

Then there’s the tiredness. Apparently I require approximately 22 hours sleep a day to avoid glaring glances and growling death threats. Someone, anyone, please tell me why I need such ridiculously high hormone levels!

I’ve also been having trouble sleeping. By the time 4am happens, I’ve usually migrated from the bed to the couch. I have no idea why; it just seems much easier sleeping on the couch these days. Until Rosie comes bounding down the stairs and leaps into my head in her generous bid to keep me company.

So nearly 16 weeks in and pregnancy is so far not the joy I’ve heard it to be. Only another 24 weeks to go though.

In other news, I’ve finally discovered Snapchat, and while the filters are all pretty unexciting, I’ve been taking great pleasure in becoming a squirrel. Or at least some kind of bushy-tailed menace. It’s been keeping me amused and mindless for around 5 minutes a month now, so small victories.